Pork tenderloin is a highly versatile cut of meat.  When cut crosswise and pounded into cutlets it can be treated like a veal cutlet. In this case a sesame ginger teriyaki marinade gave it an Asian flavor.

Cut a 1 lb. pork tenderloin into crosswise pieces of about 1 1/2″ each. Pound each piece into a cutlet of 3/8″. Place the cutlets in a bowl and coat with a sesame ginger teriyaki sauce. Cover and marinate for 4 hours+.

Make light brown rice so that it will be ready when cutlets are finished cooking.

When ready to cook, bring cutlets to room temperature and pat them dry, removing the marinade. Set aside. In a cast iron skillet, add 1-2 tbsp of olive oil to coat the bottom of the pan and brown 1 bell pepper julienned and 1 small onion cut into 1/4″ thick half-moon slices. Season with ground black pepper and garlic powder to taste (3-4 mins). Set aside on a plate.

Add a little more olive oil to the skillet and brown the cutlets on each side, about 4 minutes per side. Remove from pan and set aside on a separate plate. 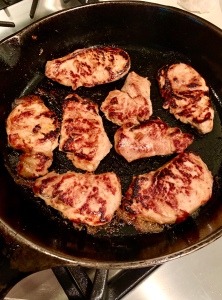 Transfer the cooked rice into the skillet on low heat to soak up the juices and cooked bits. Add 2 tbsp sesame oil, 1/2 cup fresh teriyaki ginger sesame sauce. Stir over low heat until the rice is heated and the sauce distributed. Add the peppers and onions into the skillet and mix into the rice and sauce.

Serve 2 cutlets per serving with the rice, onions, peppers and teriyaki sauce.