Another gem from mAd Ben 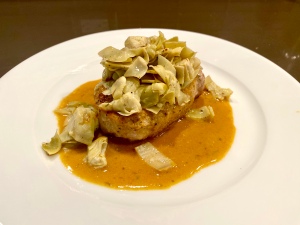 Drain liquid from one can of quartered artichoke hearts into bowl. Add 1/3 cup of Dijon mustard, 1 tbsp. paprika, 1 tsp. cayenne, salt and pepper to taste. Blend.

Chop drained hearts into strips as if they’re going into a chopped salad and put in separate bowl. Squeeze half lemon over artichokes, add 1/4 cup olive oil, salt and pepper to taste. Toss together in bowl and put to side.

Rub garlic powder, salt and pepper on both sides of pork chop. In skillet, add tbsp olive oil and bring to heat. Place pork chop in skillet. Should immediately sizzle. Brown both side of chop (1 minute each). Put chop in preheated over 300 degrees for 10 minutes or until 130 degrees internal temp. Remove pork chop and place aside on plate to rest.

In skillet, turn down heat and add 2 tbsp butter as well as sauce mix (if you need an excuse to open a bottle of white wine, add a splash of that too). Lightly scrape bottom of skillet, mix contents, let simmer for 5 minutes. Add chop back to skillet and spoon sauce over for 1 minute.

Plate pork chop and pour sauce from skillet over it with artichoke slaw on top.